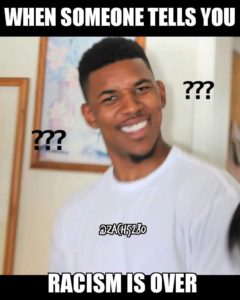 Let us talk briefly about something you might not expect in a mountain art journal: racism.

(The following journal entry contains some language offensive to humans)

Despite the personal nature of this story I believe there is value in sharing these experiences when one is ready.

My mom and her family, who I was raised with in Denver, are Jewish and my dad is black. (Not sure there is a more offensive mix to the KKK.) Aurora and Denver, Colorado are very diverse cities. I would love to tell you that racism is dead and you can be anything you want to be. But I like to be honest and refuse to be part of the problem (by being silent) to avoid alienating a few closed minded folks. Let me preface this story by saying I have an extremely mixed group of friends whom I love, respect, and adore.

I have been called the n word as a racial slur by Caucasians. Too many times to possibly count going back to elementary school. Several times have been at school or work: places the offender knew I would risk severe consequences reacting. Several times have been on busy streets (including a few in the mountains), and one was at a party at a friend’s house. The lion share of the incidents have come from friends who thought we were cool like that. (Never.) One incident in 2015 on the streets of downtown Denver stands head and shoulders above.

My Caucasian friend “Johnny” and I were walking by a bar, ironically called Southern Hospitality, on the way to a different bar with a completely opposite theme. He was in good spirits and talking with passersby, to my annoyance at the time. He and a fellow veteran began exchanging banter while I ignored their shenanigans distracted on my phone. I barely looked up from my screen as they were squaring up to play fight. Irritated and turning to leave I say “Let’s go!

Just after that I see a something coming out of the corner of my eye from behind me. Some type of fist seemed to have collided directly with my face.

Let’s take a moment to explain the difference between being sucker punched and being hit first. If you are in someone’s space talking loud and they punch you: you just got hit. If you aren’t paying attention to, involved in, or even facing a situation and someone you don’t know punches you: you got sucker punched.

Before “Johnny” and I could react, between three and seventy (it was hard to count them due to their similar appearance and persistent movement) big belt buckle clad white guys in red flannel came shuffling out of Southern Hospitality to back up their cowardly friend. The one who I assumed hit me had some words of encouragement I will remember forever:

“WHAT’S UP NIGGER?!” (It looks horrible when written out, doesn’t it? Well, not as horrible as it sounds in a slurry southern drawl directed at you with a stunned head.)

His friends echoed the same words threateningly. As much as we wanted to go kamikaze swinging into a racist group of crazy veteran strangers who might be carrying, as I hear is popular in southern states, I thought better of it. As angry as I was I pulled “Johnny”, as livid as I’ve ever seen him, away.

The dreadfully frustrating feeling of wisely backing down from that encounter has followed me around a lot longer than the knot on my eyebrow. I have done my best to not let it affect me or how I see certain demographics, but logic only goes so far to outweigh experiences. Shortly thereafter I moved to Vail to immerse myself in my passion, my therapy, and my hope for the future.